This remodeled farm house is the last of the farm houses built by members of the Bolmer family. Settling here before 1799, the Bolmers were the first early Dutch settlers in the fertile Washington Valley. Robert and Marie Bolmer had 12 children all baptized at the Dutch Reformed Church of Raritan. The Bolmers were staunch patriots and all the menfolk served their country in time of war and peace.

The house stands on its original site over looking the Raritan River. The land was once part of an 834 acre plantation that Derrick’s father, Michael, purchased in 1697. Derrick, who was born here in 1699, was a prosperous farmer, respected member of the community, and staunch patriot.

Derrick’s house served as headquarters for Quartermaster Nathanael Greene during the 1778 -1779 Middlebrook Encampment, and units of the Continental Army were encamped on his land. While in residence, General Greene wrote a letter to a friend describing "a pretty little frisk" held in the house, and during the course of the evening, General Washington danced with Mrs. Greene for "upwards of three hours without seting [sic] down".

Far Hills Station was built by the Delaware, Lackawanna & Western Railroad in 1914 and was designed by a staff architect, L.R. Simpson. The station is nearly identical to the earlier Morris Plains Station, yet is constructed of reinforced concrete rather than brick. 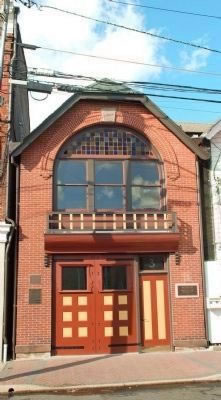 Somerville relies upon volunteers to staff its Fire Department. The first volunteer fire company organized in 1835. Since then, three more companies have formed, all manned by volunteers.

This building was constructed in 1888 for the West End Hose Company to meet the needs of residents on the west side of town. The new brick building replaced a wooden shed which had housed the hand-drawn fire fighting apparatus of Union Fire Co. No. 1 (1852-1878). Some of the bricks used in the construction were acquired when Daniel Robert demolished the "castle" on the site now occupied by Borough Hall. in addition to hand drawn fire apparatus, the building was home to the borough's first horse-drawn truck (1888) and Macky, the horse purchased to pull the single harness rig. Later in 1916, the first motorized apparatus was purchased for West End Hose Company. 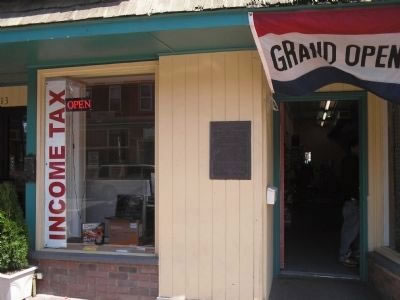 Here Hendrick Harpending, a shoemaker from Holland, built his home circa 1720, which later became a tavern, owned by his son, Peter.

Soon after the adoption of the Declaration of Independence, July 4, 1776, the townspeople assembled on the street in front of this tavern to hear it read by their neighbor, Hendrick Fisher of South Bound Brook, President of the Provincial Congress of New Jersey, member of the Committee of Safety and an “enemy of the crown,” excluded from the General Amnesty offered the rebellious colonists earlier that year. 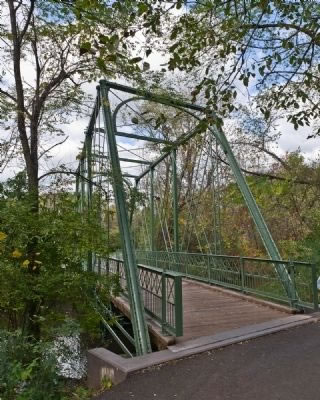 The Hibernia Mine Railroad Bridge, constructed in 1879, is the oldest surviving metal truss bridge in Somerset County, the second oldest Phoenix column bridge in New Jersey and the only one built as a railroad bridge.

Pre-Revolutionary Dutch Farmhouse Built c. 1760. Headquarters of General Henry Knox During The 1778-1779 Winter Encampment Of The Continental Army Near Pluckemin. 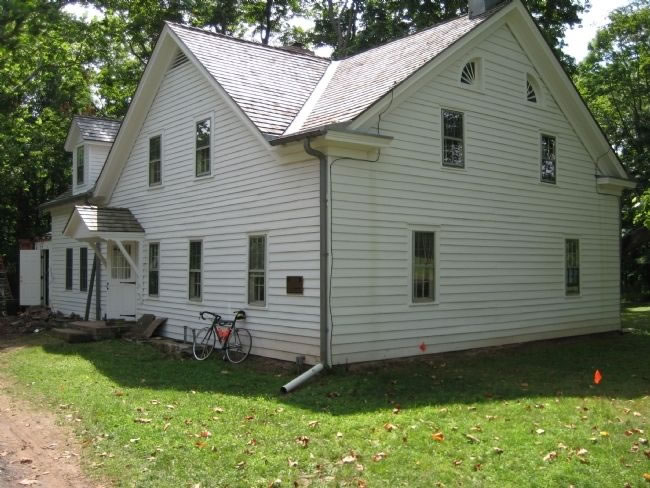 The farmstead is historically associated with the Rev. Samuel Kennedy, a renowned local minister and educator; Col. Ephraim Martin, a Revolutionary War soldier and New Jersey legislator; and Oliver Stelle, a prominent land owner. The farmstead is significant for its association with these early residents as well as containing a good example of early English-type barn and other architectural examples typifying 18th and 19th century domestic and agricultural building. The farmstead is an important vestige of Bernard Township's rural past.

One room school house from 1860 to 1944. One teacher taught all eight grades.
Enrollment varied with attendance up to 35 students. Original structure included a belfry. The Board of Education transferred the building to the borough in 1949, at which time it became the Borough Hall. 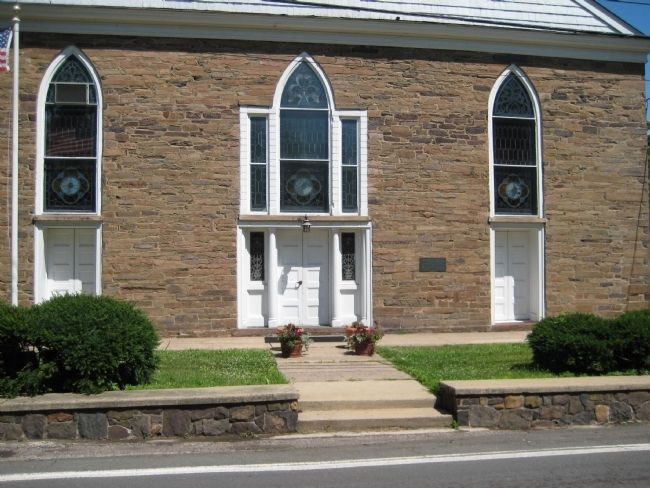 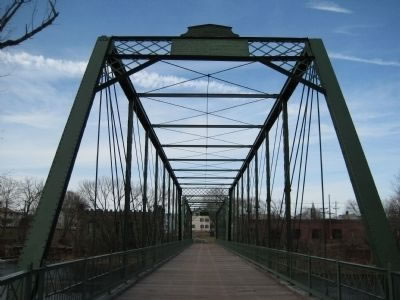 The Nevius Street Bridge is a 300-foot-long, two span, double-intersection, Pratt through-truss bridge. It is the oldest documented metal-truss bridge in the county, being constructed in 1886 by the Wrought Iron Bridge Company of Canton, Ohio.

The confluence of Peapack Brook and the North Branch of the Raritan River became a rural industrial center during the 18th century when a saw mill, grist mill, tannery and bark mill were located nearby. The Peapack Brook Rural Industrial Historic District includes five houses, several outbuildings and mill structures that reflect the industrial and agricultural development of the area, ca. 1750 - 1900. 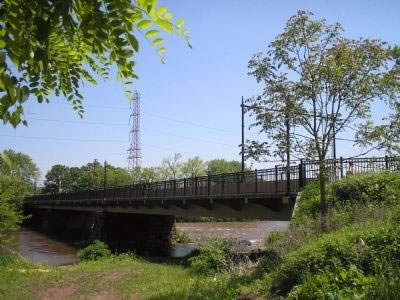 During the American revolution this bridge was used at various times by both American and British armies. At this spot on January 4, 1777, General George Washington made the final decision to abandon any intention of attacking New Brunswick. He instead moved his army northward to winter quarters at Morristown. Thus ended the victorious Trenton-Princeton campaign, saving the revolution.

The first bridge across the Raritan River in this area was completed during the fall of 1761. In 1762, the general assembly paged an act “to empower the managers of the Bound Brook Bridge to raise by lottery a sum of money for rebuilding and completing said bridge”. The 1767 Somerset County road survey described it as a “wood frame bridge”.

In 1771 another act was passed to raise funds to maintain the bridge herein “known by the name of the Queen’s Bridge”. Sometime later, the Queen’s Bridge became a covered wooden bridge. It was next replaced by a classic steel pipe truss bridge in 1875. The stone piers under today’s span (built in 1984) date back to at least 1875. 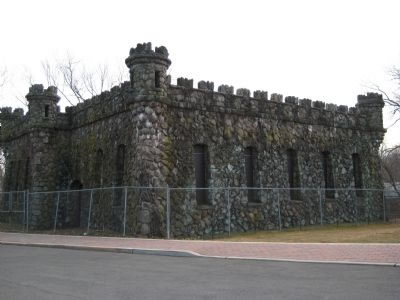 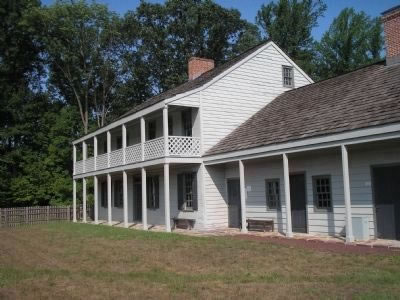 One of the oldest houses in the Millstone River Valley, the original portion was built between 1702 and 1710.

In 1783, while the Continental Congress met in nearby Princeton, Gen. George Washington made his headquarters in this house. It was here that Washington received the news of the signing of the Treaty of Paris which ended the Revolutionary War. Washington wrote the "Farewell Orders to the Armies of the United States" in this house. It was one of his last official acts as Commander of the Army.

Once the home of Daniel Robert, this castellated Gothic residence was constructed in 1888 and is a careful copy of a celebrated design by noted architect Alexander Jackson Davis.
The building is the second on this site, preceded by a residence in a similar style that was constructed in the early 1840s for Albert Camman. Upon his death in 1866, the home was purchased by Eugene Doughty. Later, his son Joshua, sold the property to Daniel Robert.
The original structure was replaced by the present one. After Mrs. Robert’s death in 1923, the estate was sold to the Somerville Lodge of Elks. The ballroom they added now houses the Borough Library. The property was acquired by the Borough of Somerville in 1958.
Fires in 1967 and again in 1980 required extensive renovations. However, much of the elaborate original interior remains intact.

Built about 1740. Original central portion of house served as Headquarters for Baron Von Steuben during the winter of 1778-79. The borough of South Bound Brook
Settled 1681. 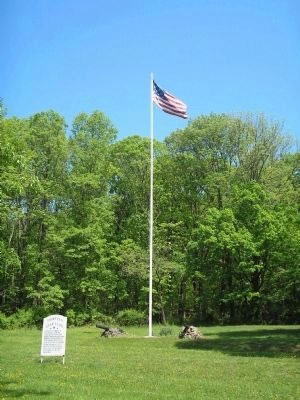 By special Act of Congress, the Betsy Ross flag is flown here 24 hours each day. This is to commemorate Washington’s Army having encamped in this area June 14, 1777, the day Congress adopted the Flag Resolution. The period of encampment extended from June 14 to July 2, permitting sufficient time for an official flag to have been brought from Philadelphia to be flown at Middlebrook.