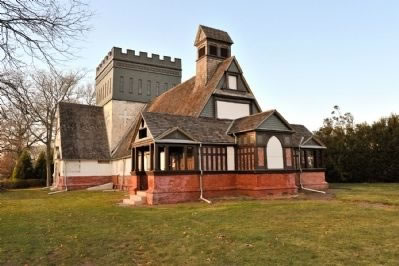 Deconsecrated in 1953, it became the Long Branch Historical Museum.

Allaire State Park consists of 3,035 acres located in Monmouth County on New Jersey's Outer Coastal Plain. This pine and oak forest is similar to that found in the heart of New Jersey's Pinelands National Reserve. The Manasquan River bisects the park and flows east to the Atlantic Ocean. 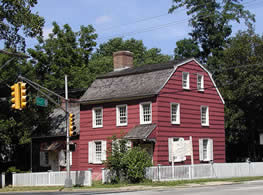 Built circa 1700, this house was acquired by the Historical Association in 1968 and is restored to the mid to late 18th century period when it was a tavern known as the "Blue Ball." Two rooms are furnished as a tavern of the period, where neighbors met to share conversations and news, travelers dined and lodged, and community groups held meetings. 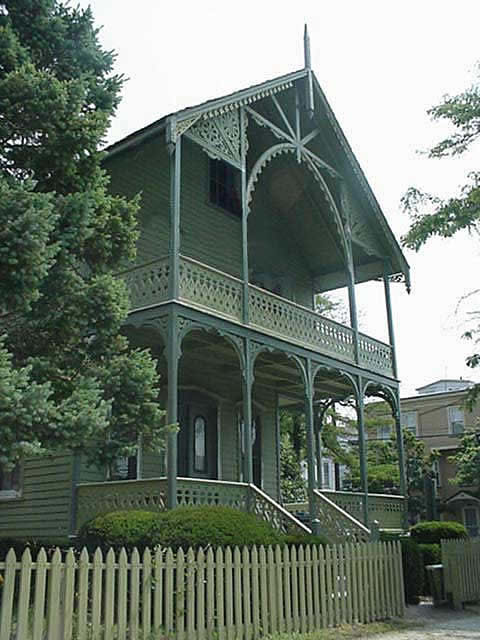 Centennial Cottage, an authentic Ocean Grove seashore vacation home, was originally owned by the Fels family of Philadelphia. It is located at the corner of Central Avenue and McClintock Street, and is completely restored and furnished in the period of the 1870's. While the museum is owned by the Ocean Grove Camp Meeting Association, it is operated by the Historical Society of Ocean Grove whose members serve as hostesses. 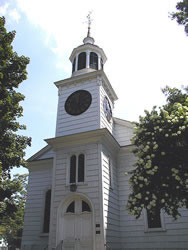 Serving an Episcopal congregation founded in 1702. The 1769 Christ Church building, designed by colonial architect Robert Smith, stands at the corner of Broad Street (Route 35) and Sycamore Avenue. A clock tower with bell was added in 1874.

The church was used as a barracks during the Revolutionary War, resulting in in a bullet hole in the steeple gilt ball and a musket ball embedded in the original pulpit. Many settlers of Monmouth County are buried in the graveyard surrounding the church whose earliest grave marker is dated 1719. 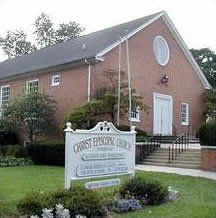 The Christ Church, Middletown, on the corner of King's Highway and Church Street has served a Church of England congregation since the 1680's. In 1795, the Church was deeded land of the Middletown Village blockhouse and county court by a former justice of the court. In 1744 a church building was erected on the blockhouse foundation. The present Christ Church, Middletown building was built in 1836, still using the blockhouse foundation dating to 1670.

William and Elizabeth Covenhoven built this impressive Georgian house in 1752-53. The main rooms have been furnished according to a 1790 inventory of William Covenhoven's estate, and show the way a successful local farmer lived about the time of the American Revolution.

British General Henry Clinton occupied the house as his headquarters just prior to the Battle of Monmouth in 1778. Open-hearth cooking demonstrations are offered by appointment to school groups and occasionally to the public.

The Eden Woolley House, circa 1747, is one of the few 18th Century Homes surviving in Ocean Township. The house was occupied by the Woolley Family for most of its life. Eden Woolley, for whom the house is named, occupied the house from 1835 until his death in 1892, and was one of the five men elected to Ocean Township’s first governing body when it was formed in 1849. 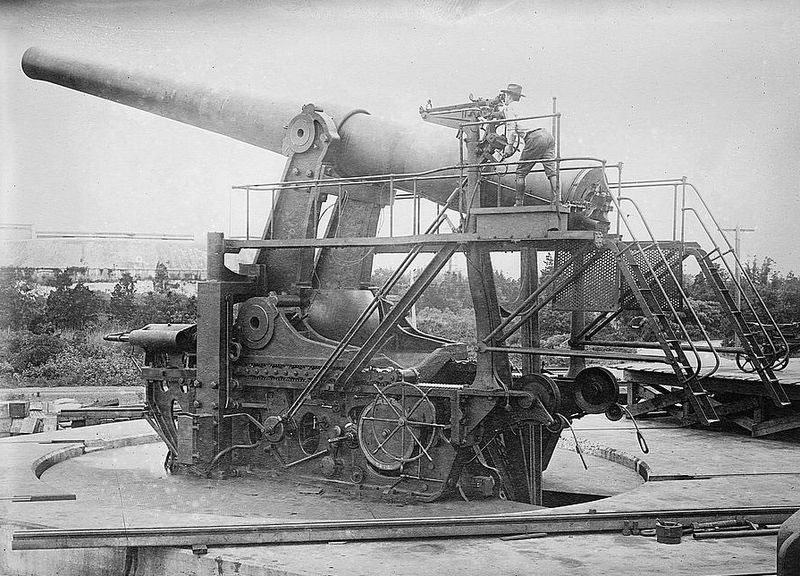 Built in 1898 includes gun batteries, over 100 other buildings, and the Spermaceti Cove Visitor Center. Above is a picture of one of the "disappearing guns". 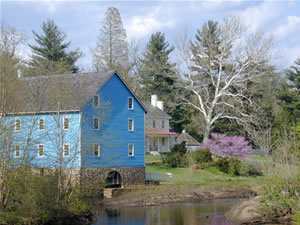 Historic Walnford is the 36 acre Historic District at the heart of Crosswick Creek Park. This country estate and former mill village provides a window to view more than a century of social, technological, and environmental history in Western Monmouth County. The site includes a large home built for the Waln Family in 1774, an 1879 Carriage House, and assorted outbuildings and farm structures. Much of the site's interpretation is connected to the newly restored and operating late 19th century Gristmill. Crosswick Creek Park encompasses the Historic District and 1,000 additional acres preserving the beauty and ecology of the stream and its banks as it flows through the western corner of Monmouth County. 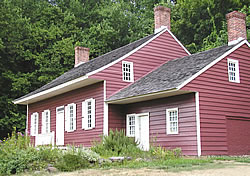 Local Dutch vernacular building traditions are illustrated in the house begun about 1754 by William Holmes, who was of Dutch and English descent. Only the symmetrical facade and a few interior details reflect mainstream Georgian architecture while the interior floor plan is made in the Dutch tradition. Fine examples of mid-18th century furnishings complement the remarkably preserved building. Every spring, in conjunction with neighboring Longstreet Farm’s sheep shearing, spinning and weaving demonstrations are offered at Homles-Hendrickson House.

Exhibits a fascinating arary of firefighting artifacts and equipment dating from the 19th century to a section fo steel from the World Trade Center. 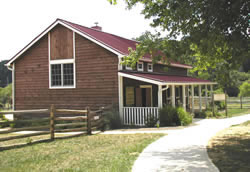 This is a working farm where historical interpreters in 1890's dress plow the fields, feed the animals, and keep the house as it was in the 1890's. Included as part of the year-round activities at Longstreet Farm are summer camps and story telling for children; blacksmithing, threshing and quilting demonstrations for all ages; and tours of the buildings and barnyard animals.

Marlpit Hall, built circa 1756, was home to Edward Taylor, a prosperous landowner and merchant who was active in colonial government and an ardent loyalist.  The Taylor’s lost much in their wealth and influence after the Revolutionary War but retained the family farm.

The Battle of Monmouth was a political triumph for the Continental Army and General George Washington. The Continental Army had met the British in open field and forced them to retreat. British casualties were two to three times greater than those of the American troops.

The New Jersey Vietnam Veterans' Memorial honors all those who served our country and state during the Vietnam War, especially the 1,562 New Jerseyans who did not return home.  It is a powerful and fitting tribute to their sacrifice. The Vietnam Era Education Center serves as a location for various historical lectures and discussions regarding the Vietnam Era. 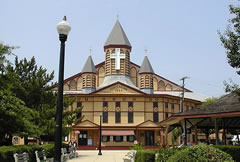 Ocean Grove, a National Register Historic District, was founded by the Ocean Grove Camp Meeting Association in 1869. The focal point of Ocean Grove and the hub of all major summer program activities is the Great Auditorium, a majestic structure built in 1894, seating 6,500 persons. 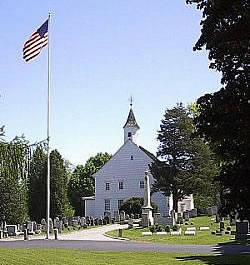 Old Tennent Presbyterian Church was built in 1751-53 and served as a temporary hospital for the American wounded. Tradition says that musket balls pierced its walls during the battle.

The church was named in memory of the pastors John Tennent and his brother, William. Near the church are monuments to soldiers killed during the Battle of Monmouth, including Col. Henry Monckton, the highest ranking British officer to die in battle. 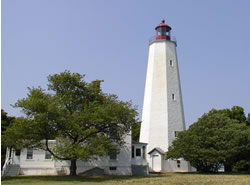 Built at the request of New York merchants wanting to protect their ships entering the harbor, the Sandy Hook Lighthouse was lighted for the first time on June 11, 1764. The octagonal tower was the fifth lighthouse in the colonies and remains the oldest operating lighthouse in the United States. The lighthouse was occupied by British soldiers during the American Revolution, and was bombarded by cannons served by Patriot troops. It was also the sanctuary to local refugees who were sympathizers of the King.

On March 2, 1889, Congress approved $20,000 for the establishment of a lighthouse in the vicinity of Squan Inlet. It would become the last live-in lighthouse to be built on the Atlantic Coast.

The site was chosen to be Sea Girt at Wreck Pond, deed dated July 29, 1895, on a 100 by 100 foot lot overlooking the Atlantic Ocean. The lighthouse was positioned 19 miles south of Navesink Twin Lights, and 26 miles north of Barnegat Light. Completed one year later, the lighthouse was proudly commissioned, and its beacon was first illuminated on December 10, 1896. The lighthouse is part of an L-shaped Victorian building and it first shone in 1896.

Due to its location, it was originally (but incorrectly) called the Squan Inlet Lighthouse. The name was soon changed to Sea Girt Lighthouse on March 1, 1897.

Home of the author who changed the course of literary style when he penned The Red Badge of Courage. 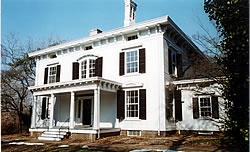 Joseph Dorset Taylor and Mary Holmes Taylor, for whom this house was built, were married in 1849. Both resided in New York where Joseph was a very successful merchant in the China Trade working with his uncle, Mary's father. Both were proud descendants of the Taylors of Marlpit Hall which had remained in Mary's side of the family. After their marriage, Joseph and Mary decided to move back to Middletown and build a grand house on the family homestead.

This house, Orchard Home, which we now call the Taylor - Butler House, was built in about 1853 and reflected the wealth and status that the Taylors had achieved. Here they raised their family, a son named Edward who became a professional photographer and a daughter named for her mother who was the last family member to live here. The house was furnished with Taylor family heirlooms and with treasures from the Orient imported by Joseph's company.

After the younger Mary Holmes Taylor's death in 1930, the house stood empty for about ten years until architect Henry Ludwig Kramer purchased it for his home and office. He lovingly restored the house and added indoor plumbing, a feature that replaced the two-story out-house that extended over the kitchen wing. In the 1950s, George W. Butler purchased the property. He and his wife, Helen, were noted for their community involvement and hospitality.

For over two centuries, the Highlands of Monmouth County have served as a natural site for a lighthouse. The present towers, 250 feet above the Sandy Hook Bay,on the highest point along the coast, were constructed in 1862.Twin Lights of the Navesink is a brownstone double lighthouse. Though decommissioned in 1952, local organizations had a 500-watt blinker light installed (in 1962) as a reminder of the Light's heritage, maintained by the State Division of Parks and Forestry. The new exhibit installation centers around the history of the Twin Lights and the U.S. Life-Saving Service. Built in 1732. Here, after the Battle of Monmouth, Washington ordered the
arrest of Lee, who had disobeyed battle orders. Moses Laird was the guide to General George Washington before the Battle of Monmouth and host to the General on the night of June 29, 1778 the days following the battle. This famous church was the pastorate of Reverend William Tennent. It stands on the famous Battlefield of Monmouth.

For several long, hot and exhausting hours during the afternoon of June 28, 1778, the largest land artillery battle of the American Revolution raged. The climax of the battle took place here when, for almost three hours, ten Continental guns positioned on this hill fired upon then British guns located along the hedgerow on the hill in front of you.

While British shot spattered mud on General Washington’s uniform and his staff tried to get him to move, Washington calmly stood in his stirrups watching his artillery pound the Royal Highlanders.